The city of progressive learning and thinking, Kolkata is one of the cultural epicenters of the country that never fails to produce eminent scholars and people that influence the society in some way or the other.

Kolkata being an initial part of the six Nobel laureates life has somehow influenced in their great achievements and today is proud of doing so.

Starting with Abhijit Vinayak Banerjee. He is a noted professor of Economics at Massachusetts Institute of Technology (MIT) in the USA who has recently won the Nobel Prize 2019. He is been awarded the Nobel Prize for his effort to alleviate global poverty along with Ester Duflo (his wife) and Michael Kremer for their “experimental approach to alleviating global poverty.”

Being associated with a teaching family from Kolkata, where both the parents being teacher of Economic somehow influenced his interest in economics. 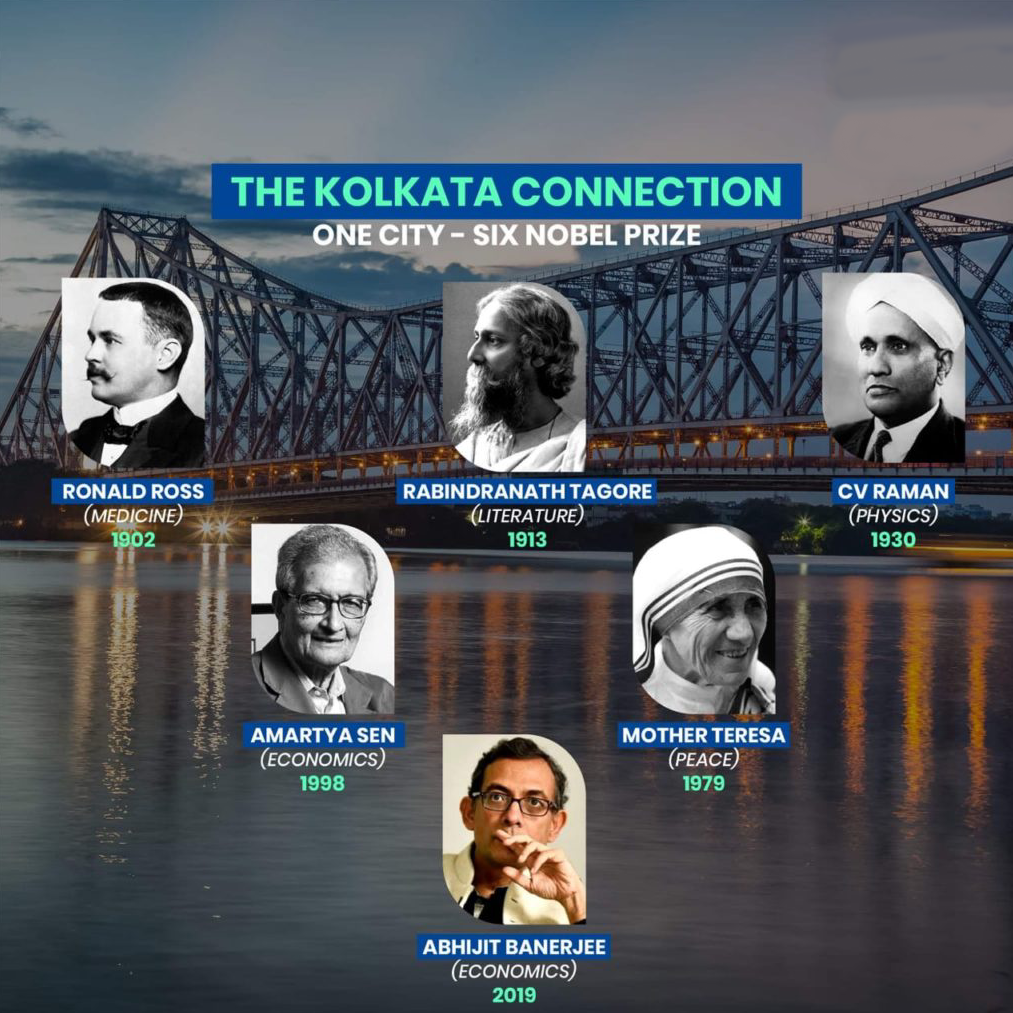 Being the second Indian-origin economist to have won the prestigious award in Economics where the first one was won by Amartya Sen in 1998 for his work in welfare economics was also a person who is also deeply rooted with Kolkata rich cultural heritage.

The affair of winning the Nobel Prize from Kolkata started as early as 1902, when Ronald Ross was awarded the Nobel Prize for Medicine for his discovery of the malaria parasite. It was in Kolkata where he had decided to make the experimental investigation as he thought to be the perfect fit that helped him on the hypothesis of Laveran and Manson, which affirmed that mosquitoes were connected with the propagation of the disease. It was Kolkata Presidency General Hospital which is now known as SSKM Hospital that Ronald Ross has confirmed his research, which later helped him gained the Nobel Prize for Medicine.

Without forgetting Kabiguru Rabindranath Tagore, who was the first Indian to win the Nobel Prize in 1913 for his Literature work for Gitanjali a collection of poems was also from the city of joy Kolkata itself. Reshaping the Bengali and Indian literature, it was him who plays a vital role in bringing the change in the thought process the rich and cultural literature heritages that people of Kolkata inheritance even today.

Bringing further glory to the city of joy in 1930, CV Raman won the Nobel Prize for physic from Kolkata during his stay by discovering the ‘Raman Effect’.

After which Kolkata had to wait until the year 1979, when Mother Teresa, who worked among the poorest of the poor helping them lead a better life was awarded the Nobel Prize for Peace in the year 1979. Choosing to help the poor Mother Teresa who was a teacher has not only devoted her life for them but was the founder of the Missionaries of Charity (MOC) that helped hapless, helpless and hopeless with a better life till today creating a change. It was Kolkata culture that helped Mother Teresa’s group grow from 12 people to more than 5,000 nuns and brother across the world which today also helps the helpless.

Being a city that won a Nobel Prize in five categories — Literature, Physics, Peace, Economics, Medicine Kolkata today with its unique mixture of all culture over centuries has always brighter future for all. With all its rich culture and literature heritage Kolkata is no less in architecture, business, science, films and other sector too helping people of various walks of life creating history.